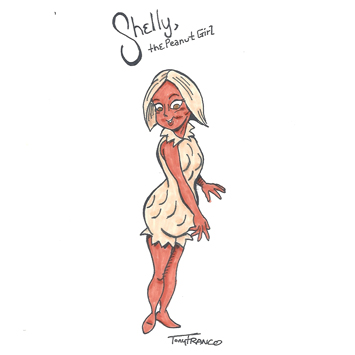 Pvt. Michelle McKay was Colonel Jenkins long-suffering secretary. Meek and sky, her few friends had oft times tried to get her to “come out of her shell,” but she was content to harbor her crush on her distant boss. After his fateful accident, Jenkins decided that he needed a fit consort and he thought of Pvt. McKay. Luring her to the lab, he duped her into entering the Bio-Regenerator, adding a peanut, since she was already said to be “in a shell” and turned it on. Amazingly, after the transformation, where once stood a mousey girl now stood a vibrant young woman. Repulsed by the deception, McKay blindly ran out of the lab. Popstar learned of the incident and sought out the Peanut-girl. Shelly offered to join Popstar to help stop Jenkins and other of his ilk. Shelly learned that, in her new form, she can release a peanut oil that can act as a healing ointment.