Every artist, I’m sure, would agree that any characters or story he creates must be “real” to him for them to work.  If the artist believes in them, so will the audience.  I call my characters my “co-workers”, for, in a sense, that is the relationship when I’m working with them.  You must know the characters so well that all you do is set the premise and the characters will “tell” you how they would react and what they would do.  Though I am simplifying the matter, the premise still holds firmly true.  This gives a concept “credibility” and invites an audience to invest themselves emotionally in a character or concept.

My next strip, the INKBLOTS, took that premise literally and ran with it.  Now, I did not invent this concept.  One would only have to watch one of Max Fleischer’s “Out of the Inkwell” cartoons to realize that, but I did enjoy putting my own particular spin on it.  It is unfortunate that the contemporary artists, who create directly on the computer will fail to realize that, in the ink bottles of those “old school” cartoonists, there exist little spirits or gremlins that emerge when the studio is closed to wreak mischief on or around  the drawing board.  If a piece of artwork is left lying on the board, being composed of ink, they may enter that artwork, if they wish, to interact with the characters or action.  This is the world of the INKBLOTS.  As the strip developed, I kept adding members to the group and, eventually, devised an origin for them in a promotional comic book.  They became magical “genies” that appeared from the inkwells of artists in need of inspiration and encouragement from time immemorial.  In the comic, the INKBLOTS secretly appear to a young girl named Kimmie, who has accompanied her single father to an art store for art supplies to keep his freelance business going to support his small family.  When Kimmie bemoans her Father’s situation, the INKBLOTS reveal themselves and divulge their origin to her to offer their help.  It was with great pleasure that I wrote “Kimmie” into INKBLOTS, for she is based on my Goddaughter, Kimmie, who, at that young age, held the wonders of the world in big blue eyes.  I still treasure those memories of that usually quiet little girl talking incessantly to me about art.

O.K., now that we know what they do, who are the INKBLOTS?

To develop the characters of the INKBLOTS, I simply thought of different things that could be done with ink.  You could smudge it, draw a squiggle line, you could blotch it, make a dot at the end of a sentence, squeeze a droplet from the dropper, or you can doodle,  After some serious rumination and enlightenment, there emerged the INKBLOTS:  SMUDGE (black, originally called “Inky”), the little, perky guy and leader of the group; SQUIGGLES (green), thin and lanky and just a tad nervous; BLOTCH (red), large and boisterous;  DOT (pink), cute, pert and no nonsense; DROPLET (yellow), the baby Inkblot; DOODLE (blue), their dog, named for what he does all over the artwork.  Well, at least he goes on the papers!); and (of course, what does every self-respecting good guy need?  That’s right, COUNT SMEAR (grey), the “bad guy”, long and serpentine, with a sneer on his lips and a glint in his eye!

I didn’t want the design of the Inkblots to be too complicated.  I wanted them to be simple and “kid-friendly”, like animated ink blobs.   I liked that they are so simple and unique.  I feel that they have the most potential, especially in merchandising and licensing, not just in gags or stories.

No Backstory of the INKBLOTS would be complete without relating the lurid licensing tale from their early history.  Around 1989-1990, I had presentations (called “bibles”) in my portfolio for LIBERTERIA, IT’S A DOG’S LIFE, INKBLOTS, and, the newbie at the time, ANGELCHEEKS.  I geared my presentations for the Newspaper Syndicate market and Licensing.  The majority of my free time was spent doing research on different syndicates and on markets for Licensing.  I avidly attended the Licensing Conventions at the Jacob Javits Center, checking out presentations and markets.

At one convention, I met a Licensing Agent, who seemed interested in my work.  Checking around, he seemed reputable and I was very excited at the prospect of seeing my work out there.  I prepared presentations with the Agent’s Name.  Unfortunately, I learned my faith was misplaced.  One of the scams in the Licensing Market is that an unscrupulous Agent can make “knock-offs” of their client’s property and market it in another part of the country without their client’s knowledge.  This, I learned, was what my agent planned to do with INKBLOTS.  He had planned to make cheap dolls of the INKBLOTS and sell them for prize machines on the west coast.  I was fortunate to be a member of the Graphic Artists Guild, who referred me to an excellent attorney to help me and rectify the situation in time. 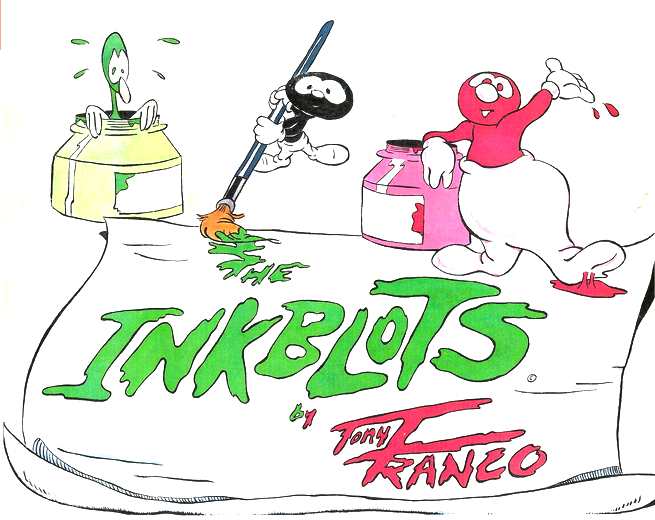