Coming up with a new idea is always a fun challenge.  Sometimes a concept or character will just spring up, but, most times, you have to search for them, looking in those nooks and crannies of your imagination.  The KNIGHTS OF ATAVAR were one of those.  While the last strip, ANGELCHEEKS, was a little whimsical, this one I wanted to be high adventure.  I always loved heroic fiction.  I feel it is essential to the human condition, to remind us of those ideals that give our lives meaning, Love, Justice, Loyalty, Faith, and Brotherhood, to name a few, and make us “civilized”.  That struck a chord while I was developing this new idea.  I have also always been intrigued by the question of human nature:  Is Man inherently Good and learns Evil, or is he inherently Evil and must be taught Good?  I have always instinctively believed that Man was born Good (I suppose that’s why my vocational bent was toward psychology and criminal justice, in order to learn, if so, why does he deviate), but, I’m sure, to most the question remains open to debate.  Following this line of thinking in developing the new storyline, it made sense that the group that would be most offended by espousing a belief of inherent Evil would be the Animals, especially considering the talk of Man’s “animal instinct” or his “animal nature”.  I came up with a group of animals that band together to take up the cause to show that atavism is altruistic, like a knight taking up a gauntlet.  They became the KNIGHTS OF ATAVAR (taken from “atavism”).

Now the trick was to come up with a “logical”, entertaining way to explain how they originated.     Whoever sparked this gathering would have to be a super Villain, who obviously believed that Man was inherently Evil and who would probably be so conceited that he’d try to prove it.  The only person I could imagine vile enough to do this I already created for LIBERTERIA, a character I called the Overseer, by the name of Devlin Neechy, a melding of two writers I am at philosophical odds with, William Devlin and Fredrick Nietzsche.  In my first personal cross-over, I gave the Overseer to the KNIGHTS.  Once I knew the Villain and his intentions, the premise pieced itself together for me:  Neechy was a brilliant scientist, highly impressed with himself and vociferous in his theory of human nature, to the point that he is ostracized by the scientific community.  Disdaining all who refute his theory of Man’s inherent Evil, Neechy leaves the country and using all his financial resources, he sets up a laboratory in a vacated castle in a foreign wilderness.  He gathers animals to use in his experiments, misfit animals, whose mutations might yield some hidden clue.  These animals break free from their cages and, using the knightly accouterments in the castle, band together and pledge to stop “the Overseer”, as Neechy now call himself, and his ilk from preying on the helpless.

As, I think, with all creators, there is a lot of Me in all of my characters and concepts, and the KNIGHTS is no exception.  My motto, which I learned from my Mom, “Right makes Might!”, not the other way around, is the motto of the KNIGHTS!  Despite my affinity for the strip, I find one discordant feature of the strip is the dark nature of the premise and the “cutesy” design of the animal characters.  The funny thing is I tried to design the characters more realistically, more anthropomorphically, but it didn’t work for me.  It seemed to make it too dark.  I feel it lost the contrast between the sentiments of the Heroes and the Villain, plus, as I have said, I always liked the dichotomy between the cute characters and the adventurous settings.  I also like the more “serious” tone of the strip, say, as contrasted to DOG’S LIFE or ANGELCHEEKS, despite the artistic style.  Lastly, I like that, if the opportunity presents itself, the KNIGHTS would be able to cross-over into the world of IT’S A DOG’S LIFE or even LIBERTERIA.  I’d get a kick out of that, and, I would hope, an audience would too. 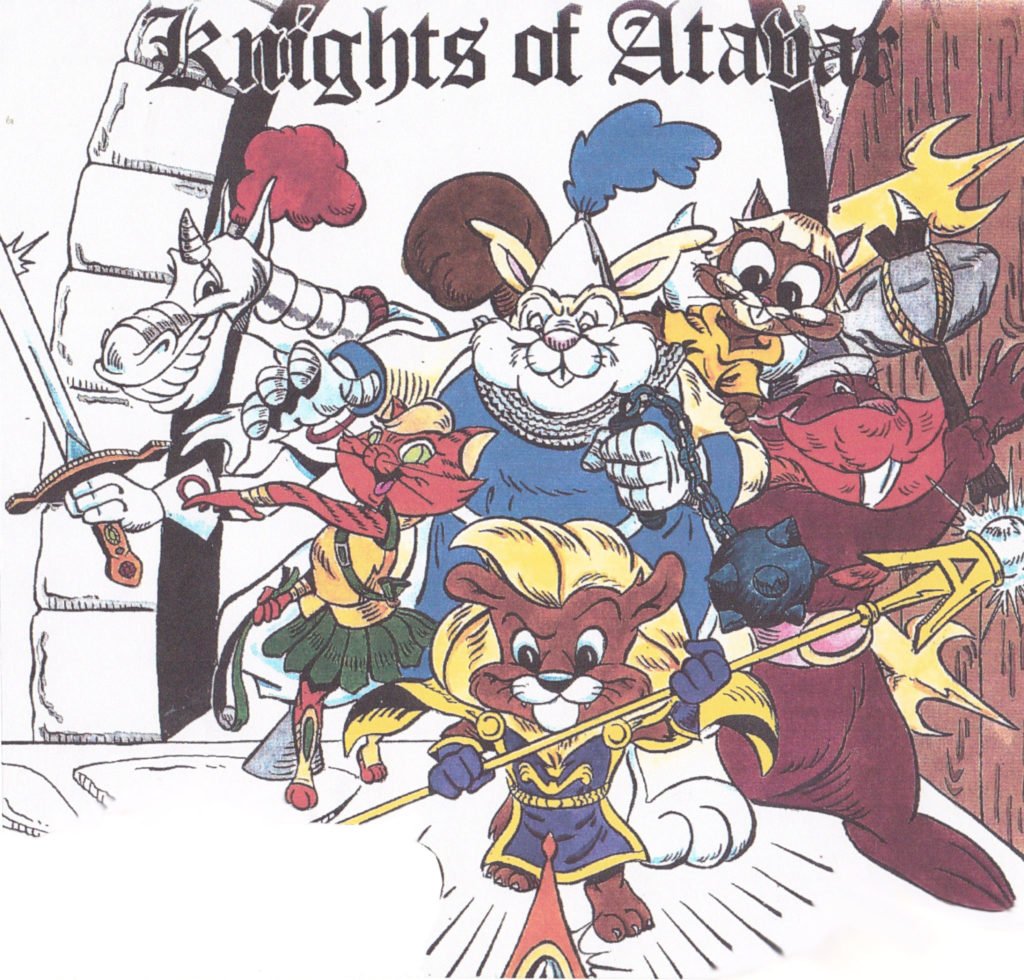