LIBERTERIA was the spark that ignited my Cartooning career.  I had been immersed in the world of Cartooning from as far back as I can remember.  I had been drawing from the time I could hold a pencil.  Cartoons, Comic strips, Comic Books, it didn’t matter.  I loved them all!  All my life, however, I was also told that Cartooning was a nice hobby, but it is not a career.  Fortunately, I had another Vocational passion to devote to my academics, but the Cartooning always flourished right alongside!

Skip to 1974, I was attending John Jay College of Criminal Justice for my Master’s Degree in Criminal Justice.  I had to choose a theme for a Thesis to graduate.  I always had a proclivity for research and writing with an idealistic bent and, more than anything, wanted my thesis to mean something.  I didn’t want a subject where I just had to count statistics.  I came up with “Anarchism as a form of Decriminalization”.  Suffice it to say, my thesis was considered too liberal for such a conservative school as John Jay and I couldn’t get any Professor to sponsor me.  I refused to change my Thesis and wound up taking the written test to get my degree.

Now, where does Cartooning come in to all this, you may ask?  Well you may and the answer is that, with all the research, time, sweat, and commitment the thesis took, I refused to let it die.  The Libertarian philosophy I had so diligently researched was developed into the fantasy world of LIBERTERIA, a utopian world (you see, Anarchism in its purist form is utopian in nature) where everything that is fantasy on our world is real in LIBERTERIA.

I developed LIBERTERIA as a story strip for syndication in newspapers.  I loved comic strips in the newspapers and felt it would be a market to reach the most people.  (True to form, I overlooked the fact that the syndication market was dying at the time).  No matter, I was determined and inspired.  It was the turning point for me to finally decide that the only reason that Cartooning could not be a career, as I had been continually told, was only because I never tried to make it a career.  Liberteria was a very personal creation for me, not only thematically, but because the characters were all cast with the people that I knew and loved.  The female lead in the strip was Sensiv the pixie, who was named for her “sensitivity” to the Flora of the Land, enabling her to “talk” to it through her antennae and control it.  Sensiv bore no small resemblance to my girlfriend (now wife) at the time, Mary Ann. The laconic Prag the gnome, the “pragmatist” of the group was the doppelganger of a close college friend, who was a math major.  A jolly dwarf with a mesmerizingly inventive mind was patterned after my very close friend and “brother from another mother”, Don Dezottis.  The academic Scholar, who resides in a Citadel in Liberteria and starts the plot in the strip, is named MacAdemia and was inspired by one of my professors in John Jay who, in turn, inspired me, Professor MacNamara.  I would be remiss not to say that the hero, Anark the elf, shared some small similarity to his creator.  I returned to LIBERTERIA many times over the years, developing it three times as a comic strip and, finally, as a novel. LIBERTERIA remains alive and well in my heart and imagination and I only hope I can give others a chance to visit and share my wonder. 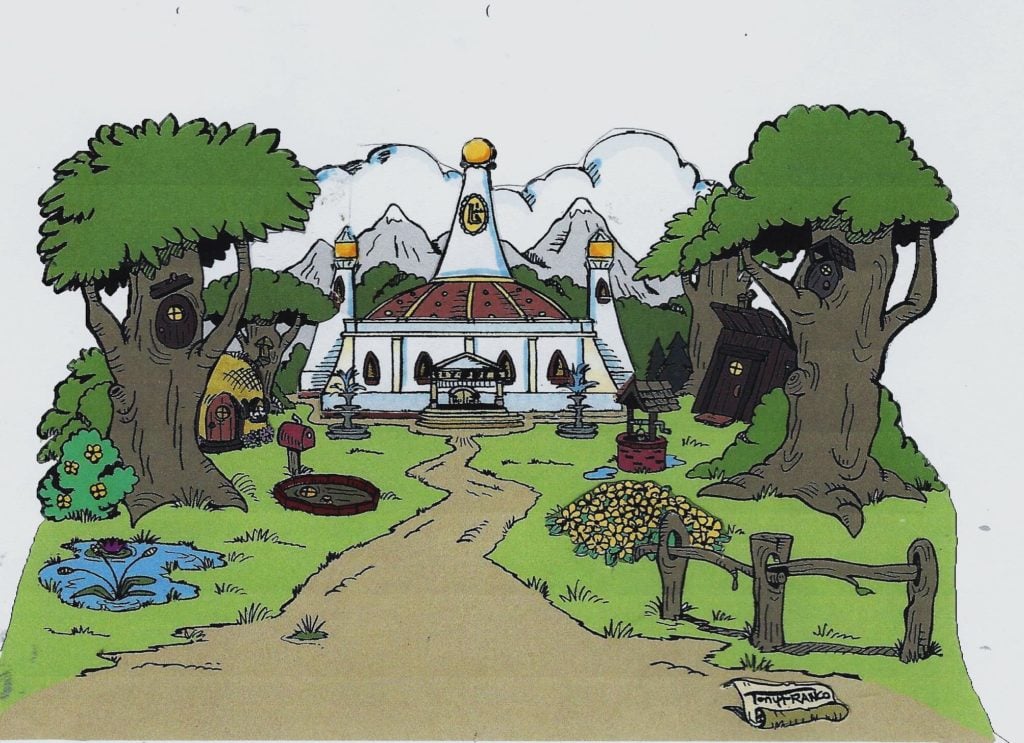