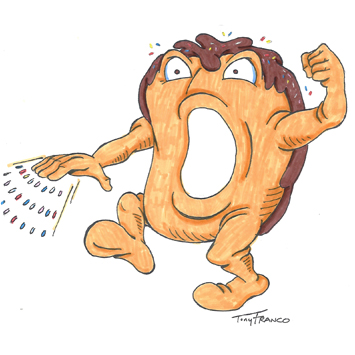 Joey Gavonne is a cheap strong-arm man. All brawn and no brains, Joey would hire out anyone with the money to pay. Joey earned the nickname “Joey Bag-O-Donuts” from the ever-present comfort food he’d have in his hand or in his mouth. Joey has the distinction of being the first “soldier” in the army of Colonel Kernel. The Colonel wanted a strong-arm man to use against his hated enemy, Popstar, and Joey had all the qualifications, brawn and gullibility. Turning his nickname into a reality, the transformation pushes the already unstable Joey over the edge. Hot-headed and unpredictable, Dough-nutz is sometimes even difficult for the Colonel to control. Along with his giant size and great strength, Dough-nutz can also shoot his sprinkles out of his hands like candy bullets.