When thinking about an idea for a new strip, I realized that the idea was already there waiting for me to find it.  I’ve often said that my wife, Mary Ann, was my Muse and that she populated just about every strip I’ve created.  Well, then, why shouldn’t she have a strip of her own.  I have always been, and still am, infatuated with my wife and, from the beginning have teased (Mary Ann might say “tormented”) her with a cartoon alter ego that I have created from my fertile cartoonist’s imagination.  “Little Mary Ann” was the epitome of the perfect little girl, sweet, innocent, cute as a button, with no small amount of narcissism (just like Mary Ann, minus the narcissism), but, what to name her?  I didn’t want to call her “Little Mary Ann”, it wasn’t descriptive enough and any of the numerous nicknames I called her didn’t seem to fit either.  I finally decided on “Sweetcheeks”, the name was catchy and seemed to fit the character.

Unlike my previous strips, SWEETCHEEKS was originally not developed as a story strip, but as a daily gag-a-day strip.  The character didn’t seem to lend itself to that type of storytelling.  I developed a series of strips on SWEETCHEEKS, focusing on her sweetness and love of animals and plants and her precociousness, but I felt she needed a “sidekick” to play off of.  Mary Ann had a favorite stuffed bunny that I had got her for Easter and he seemed to be the perfect co-star, except Sweetcheeks’ “Bunny” was alive.  When I got down to researching the “Sweetcheeks” name for copywrite purposes, I found that many others thought the name was catchy, as well.  I decided to rename the character.

I didn’t want to waste too much time getting lost in a plethora of possible new names, so, very simply, “Sweetcheeks” was rechristened “Angelcheeks”.

Now the fun started, because “Angelcheeks” did not seem like a daily gag-a-day character to me.  I love storytelling and I began to feel that Angelcheeks had more potential than I originally thought.  She was a perfect little girl, but why and how?  Simple, she was created that way, by her loving, genius, scientist father.  This also gave the character the perfect explanation for why she doesn’t age.  She could stay the same age for the length of the strip.  Coming up with an actual age was difficult, but I finally decided on four years old, thanks to my teacher wife and the preschool students she taught.  If this was going to be an adventure strip, though, what qualifications or potential does a cute four year old have?  Simple, she was created in a lab!  She could have any talents any adventure hero needed.  As it turns out, the cloning process her father used, not only made Angelcheeks perennially four years old with an unfailing innocence and sweetness, but with superior intelligence and physical prowess.  Angelcheeks became my version of the pulp hero, Doc Savage, only smaller and cuter.  Unfortunately, like Doc Savage, Angelcheeks’ father would have to meet a suspicious end to inspire Angelcheeks to use her inheritance to form her agency, “Cheeks Inc.”, to carry out her father’s wishes to uses her abilities to protect and serve those in need.  Also, Doc Savage had a team to help him.  Who would Angelcheeks’ team be?

First and foremost was “Bunny”, the cute, pink stuffed bunny that was Sweetcheeks’ favorite toy and companion.  This time, however, Bunny didn’t have to be an inexplicable “fantasy” character.  Unlike Sweetcheeks, Angelcheeks had the scientific acumen to animate him (don’t ask me how.  Angelcheeks is the genius, I just write her).  Since Angelcheeks needed more members to her team, especially a “heavy lifter”, I saw to it that she also gave life to her big stuffed teddy bear, Bruno.  Though I liked Angelcheeks working with the cute, stuffed animal characters, I knew she needed the proper parental presence in the strip.  If her parents were killed in the premise, however, who would have raised her?  It didn’t seem like Angelcheeks would have had a large, extended family, but Angelcheeks’ father obviously had money and had a very busy schedule, so it seemed logical that he would have had a nanny for his little girl.  Since Angelcheeks is so small and demure, her nanny would have to be someone contrastingly big and impressive, as well as motherly, and devoted to her charge.  A large German nanny just seemed the perfect fit and Gerta Furkinder (German meaning “for children”) was “hired”.  I still felt that someone else was needed for the team.  Considering her age, she would probably have a mentor.  Such a prodigy would undoubtedly have impressed many a professor.  It made sense that one professor would be so impressed that he would join her cause to continue to both teach and learn from her.  Enter:  Dr. Phineas Phlaburgasted, a curmudgeonly scholar with a penchant for perfection.   Still, something was missing.  Now, when Angelcheeks was being developed, there were no laptops, I-pads or A.I., but we did have calculators.  I was never hi-tech oriented, but Angelcheeks would be.  Consequently, Angelcheeks animated her calculator, calling him Digit.  Now the team was complete, but everyone knows a hero is only as good as the villain.  Angelcheeks needed an archenemy.

Since a good archenemy is a counterpart of the hero, it was only right that a virtuous female hero should have a dark, despicable female villain.  Envisioning the role, I came up with a virtuoso performer for the part.  My wife’s favorite actress, Bette Davis.  She would be the perfect template.  The name, of course, should reflect the character.  (Upon discussing naming characters, I must give a tip of the cap to my mentors, Charles Dickens and Al Capp.)   The name I decided on rolled trippingly off the tongue, “Oglias Sinn”!   A good archvillain should also have some connection to the hero and Angelcheeks’ origin provided a ready-made connection.  Since Angecheeks’ father is a genius scientist, it is conceivable that Oglias Sinn would want him working in the research laboratory in the conglomerate that she owns, but Dad constantly refuses to work for Oglias for moral reasons.  When Dad is mysteriously killed, Oglias tries to confiscate the results of his last, successful experiment:  Angelcheeks.

If the hero has a team, the villain should have a team also, right?  I thought so, too.  The first member came very logically for me.  Oglias would have tried to duplicate the experiment that resulted in Angelcheeks, but not as successfully, of course.  Enter Oglias’ “sister”, Meenas Sinn.  Where Oglias is rigid, uptight, and exact, Meenas is just a maniac with no boundaries at all (think:  a raving Phyllis Diller).  The next member was derived by following the personality of the villain.  Oglias craves power, but she also desires servility, and none could be more servile than Cypher, her personal secretary.  Cypher boasts that he has no thoughts that his Boss did not put there.  His jellyfish appearance and blank expression perfectly portrays him.  Like Angelcheeks, Oglias would need someone for the “heavy lifting” and necessary strong-arm tactics.  Filling this bill is another failed experiment, which resulted in a monstrous Cro-Magnon like mass of muscles, who calls himself “Glygl” (so named because it is the only sound he can make since his “muscle-head” has little verbal ability.)

Some years ago, at the suggestion of my wife (the real original Angelcheeks), I redesigned the character for a modern audience.  The safari jacket was replaced by an exercise suit with an emblem on it worn by the team.  Some of the characters were redesigned also.  ‘Cheeks, Gerta and Bruno sported new looks, but, more significantly, were the villains.  The “Bette Davis eyes” of the first Oglias was replaced by a character looking more like Leona Helmsley.  Meenas Sinn was now a child, reflecting more of an evil Angelcheeks.   My acknowledgement to the advancement of technology over the years was to replace Digit with new friend and teammate, called Blip (I was thinking of the sound I hear when Mary Ann is typing on her I-phone).  Blip is an A.I. projection from Angelcheeks’ I-phone and serves as her reference source and advisor.

Despite whatever changes are made, what we have is an internationally known heroine, with abilities far beyond any adult, who may be called upon by anyone, no matter their station in life, despite the challenge, to have a worthy cause championed.  What we have is:  ANGELCHEEKS, SOLDIER OF FORTUNE. 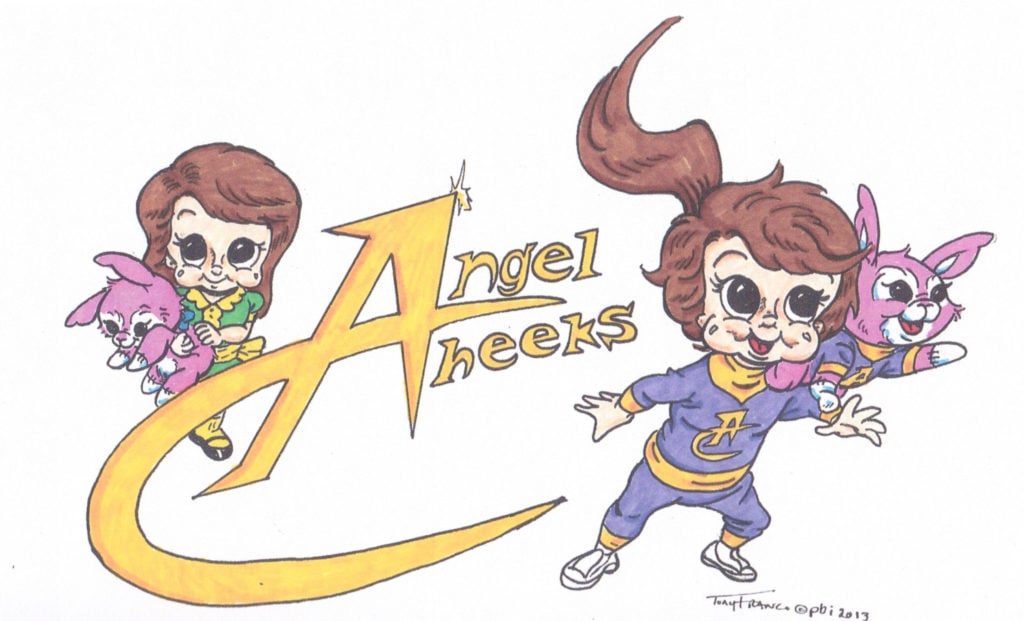