After completing the presentation to my first strip, LIBERTERIA, I knew that I couldn’t rely on one strip to sell if I was serious about making cartooning a career.  Still intent on the syndication market, I went to work on developing another story strip, while the first strip was mailed out and circulating.  I wanted to do something different from LIBERTERIA and decided on doing a “funny animal” strip.  I always loved the funny animal characters.  They suited my cartooning style.  I especially had an affinity for those adventure stories, brilliantly epitomized by Floyd Gottfredson on the Mickey Mouse comic strips and Carl Barks on the Donald Duck comic books.

While LIBERTERIA was born of inspiration, the new strip was a calculated construction.  While thinking of a title, the old saying of “it’s a dog’s life” seemed perfect, because it lent itself to all kinds of stories, plus everybody loved dogs, me included.   Inexplicably, the main character again became a scrappy, little guy with high ideals (well, they do say, “write what you know”).  Since he had to be a tough, little guy to go through all those adventures I had planned for him, he became bull dog.  I especially liked that this played against type, since bull dogs, in cartoons, were usually portrayed as big, tough guys.  It didn’t take long to come up with the perfect name for my new hero.  I thought that, considering his size, “Pup” would be a better surname than “Dog”, and the perfect “p” word quickly presented itself to define his character, “pugnacious”, and Pug Pupp (that’s right, two p’s!) was born!     Since I was a big fan of the Eastside Kids and the Bowery Boys, and I sort of envisioned Pug to be a Leo Gorcey type (that’s “type”, not “clone”), I initially gave Pug the hat Leo Gorcey wore as “Mugs” and “Slip”.     However, Pug’s hat quickly changed when, after I had cataract surgery, I started wearing a cap with a cracked brim, cocked to the side, to shield my eyes.  That cap became both our signature looks.

Casting the characters of IT’S A DOG’S LIFE is, to this day, the most fun for me!  I was working on IT’S A DOG’S LIFE when Mary Ann and I went on our honeymoon in 1979 in Disneyworld (where else would a cartoonist go on a honeymoon?) and I still remember all the various character sketches and story synopses that I did on napkins, pads, at the pool or wherever while we were there.  Coming up with Pug’s supporting cast was a natural, I just delved into the “supporting cast” of my own life.  Since Pug was a dog, I figured his co-star should be a cat (clever, wot?).  His appearance took the shape of my best friend, Don, tall and portly with google eyes and a wide grin.  The name “Dudley” just felt right, while naming him.  Though Dudley does share Don’s sense of wonder and joy, he does not share his Mensa level intellect.  Dudley is more of an innocent, complementing the more street-smart Pug.  Pug’s girlfriend, a little cocker spaniel named “Snuggles” was naturally based on my wife, Mary Ann.  Mary Ann has ever been my Muse.  She has been a character in just about every strip I’ve created, that way I get to always be with her, whether I’m working or not.  I should stipulate now that, basing a character on someone you know does not mean fitting someone into a role to build a cast of characters.  Rather it’s more like developing a kind of perception where you find inspiration in people you meet and deal with and they begin to “remind” you of a character that fits into your “world”.  It should be noted that a character is not supposed to mimic the person who inspires it.  You know you have a well-developed character only when it starts to develop a “life” of its own, building its own backstory and character traits.  Suffice it to say that IT’S A DOG’S LIFE has a wealth of characters of the numerous people who have inspired me.

Now that I had the characters, I was faced with the all-important questions of:   “Who are they?”; “Where do they live”; “How do they live?”; “Where do they work?”; and so on…   I knew they were “street guys”, i.e. “knock-around” guys that would have no second thoughts relating to any kind of character.  I also didn’t want them tied up with a responsible job.  They were “free spirits”, who had to be available to go on any adventure or quest presented to them.  I didn’t want them “bums” or “paupers” either.  They were responsible characters, who had a strong ethical code.  Since I knew they wouldn’t be renting an expensive apartment in the big city where they lived (and the strip was set), I found them a cozy, quaint little shack.  This would be their “castle”.  But, where would the shack be located?  I thought that Pug and Dudley would want their own plot of land and I wanted someplace in the open, where there might be a turnover of people passing, to give the best possibility for story ideas.  I thought that a junkyard would be a logical place for a small shack on a plot of land.  The backstory built itself from there.  If they had a plot of land in the junkyard, they would probably be renting it from the owner of the junkyard.  This also solved the problem of financial support, because they would naturally pay off the shack and support themselves by doing odd jobs in the junk yard for the owner, a curmudgeonly old goat by the name of Phil Hoarder (Get it?  “Phil” like “land fill” and “Hoarder” as in “someone who collects junk”), a role brilliantly inspired by my Father-in-Law”, Ernie.  What about the supporting characters?  Where would Snuggles live?  Since Snuggles is like a “babe in the woods” character “lost in the big city”, she would stay in a place where she would feel safe and protected.  I created a boarding house where Snuggles lived with her best friend, Maizie, a portly poodle librarian with a sharp mind and tongue to match and a fierce loyalty to her roommate.  The boarding house was owned and run by the sweet “mother hen”, Miss Chickadee, perfectly portrayed by my Mother-in-Law, Julie.  Miss Chickadee would serve as the mother figure to Pug and the rest of the “Gang” and the boarding house would be their gathering place and refuge.  Ironically, the original members of the “Gang” ( Hacker, a little gopher, who is the intellect and a computer nerd; Hy Stakes, a rodent gambler; Q-Tip, an easy going giraffe, who only moves fast in his taxi; and Featherhead, Miss Chickadee’s nephew), did not have human archetypes for the most part and were developed primarily for story purposes.

There you have it, my recipe for a comic strip with likeable characters, high adventure, and crazy comedy. I developed IT’S A DOG’S LIFE to have a very universal canvas, able to tell any kind of story with any kind of characters.  I also must admit that, if there were any of my characters that would serve as my “alter ego”, I would have to admit it would be “Pug” 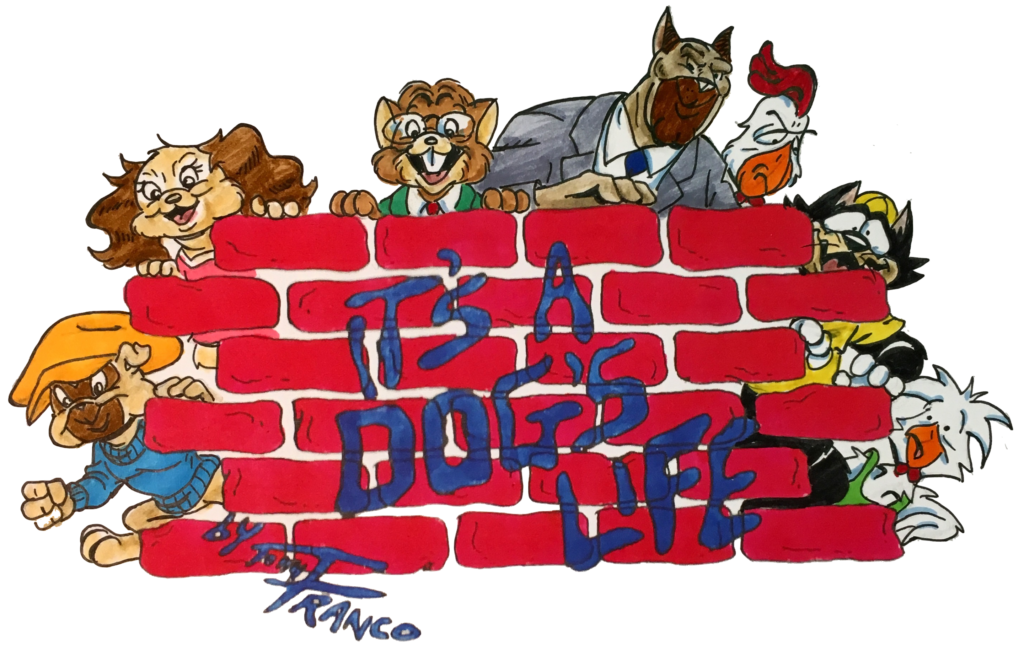